What is the price for the people

What is the price for the people

Former banker Vladimir Preis, could have been involved in the withdrawal of money from the Russian House of Selenga to offshore. And if the investors of the financial pyramid are left with nothing, then Preis is thriving. New interesting details of the banking activities of Vladimir Preis, co-owner of the collapsed Monolith Bank, have surfaced.

According to the correspondent of The Moscow Post, back in the 90s, through the banks “BAM-Credit” and “Russian House Selenga”, Preis, using offshore companies, could participate in the scheme to illegally deprive depositors of more than 70 billion rubles.

Recall that both financial offices began to rapidly collapse against the backdrop of a corporate conflict between Petr Yanchev and Lev Weinberg, who later became defendants in criminal cases. The latter is a friend of Preis since his student years.

“BAM-Credit” was deprived of the license in 1998 for failure to fulfill obligations to creditors and depositors. Yanchev-friendly “Selenga Russian House” “folded” in three years, leaving millions of investors without investments, who trusted the promises to increase their resources. Such companies are called MMM.

Veka journalists describe the connection between the two financial organizations as follows: BAM-Credit was initially positioned as the leader in financing gold mining. But in fact, the main task of the bank was to launder money collected from the population of Russia by the “Russian House of Selenga” – one of the largest financial pyramids.

Vladimir Preis in this system headed the Moscow branch of BAM-Credit. As Vek journalists wrote (later they denied this information, but we cite it as a possible background to the story), just a few weeks before BAM-Credit was declared bankrupt, all the assets of its Moscow branch were transferred to Preis Bank Monolith.

Now this monetary institution, despite the promising name, is in the so-called “Book of Memory” of banking assets. Monolith’s license was revoked in 2014 due to its inability to satisfy creditors’ claims for monetary obligations.

And his leadership came under criminal prosecution. Moreover, none of the Preys, as they say, was not injured. According to investigators, from 2012 to 2014, the management of Monolit, represented by the ex-chairman of this credit institution Alexander Danilin and his first deputy Andrey Ikramov, issued unsecured loans in the amount of 6.4 billion rubles to almost a hundred commercial structures.

According to an informant for The Moscow Post, the offshore companies of Brownypool Trading Ltd, whose management still includes Vladimir Preis and his son Ilya, were allegedly used to withdraw funds. 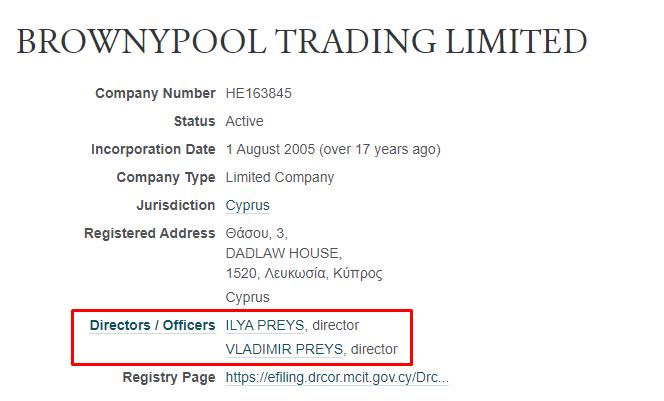 The latter, along with another offshore Angara Mining plc, “lit up” in a legal dispute between Gazprom Neftekhim Salavat and PZTSM-Vtormet (Vladimir Preis was the general director), which almost privatized precious metals owned by Gazprom a few years ago. The fact is that a subsidiary of the gas giant kept these valuables in the warehouses of PZTSM-Vtormet, and then bankruptcy and surveillance procedures were introduced against the latter, and Gazprom stopped receiving information about the location of this property.

Also, Brownypool Trading with Angara Mining Plc were related to the ownership of CJSC Vasilyevsky Rudnik (Krasnoyarsk Territory) before their shares were transferred to Gazprombank in 2011 for debts. At the same time, the Vasilevsky mine and Angara Mining became affiliates of Gazprombank on September 14, 2010. Bankrupt but lost nothing?

According to the informant, the actual co-owners of Angara Mining are Vladimir Yuryevich Preis and his son Ilya Preis (one third each), Petr Golovinov and Andrey Chuguevsky. To date, only Golovinov has formally retained a share in the company of the listed persons.

In 2015, the FDKB was deprived of its license due to non-compliance with federal laws governing banking activities, as well as Bank of Russia regulations, the value of all capital adequacy ratios below two percent, a decrease in the amount of own funds below the minimum value of the authorized capital established on the date of state registration of the credit organizations.

According to banki.ru, the institution pursued a high-risk lending policy associated with the placement of funds in low-quality assets. A proper credit risk assessment revealed a complete loss of the bank’s capital. At the same time, the credit institution was involved in conducting dubious transit operations in significant volumes.

Personally, Preis Vladimir Yuryevich was still the president of the Transnational Commercial Bank, which in 2015 also lost its license for the same reasons as the FDKB. In addition, CB “Transnational Bank” was involved in conducting dubious operations of clients to withdraw funds abroad in significant volumes.

In addition to the above-mentioned offshores, the money could settle in ROCKMEADOW TRADING & INVESTMENTS LIMITED, which is also controlled by the Preys. 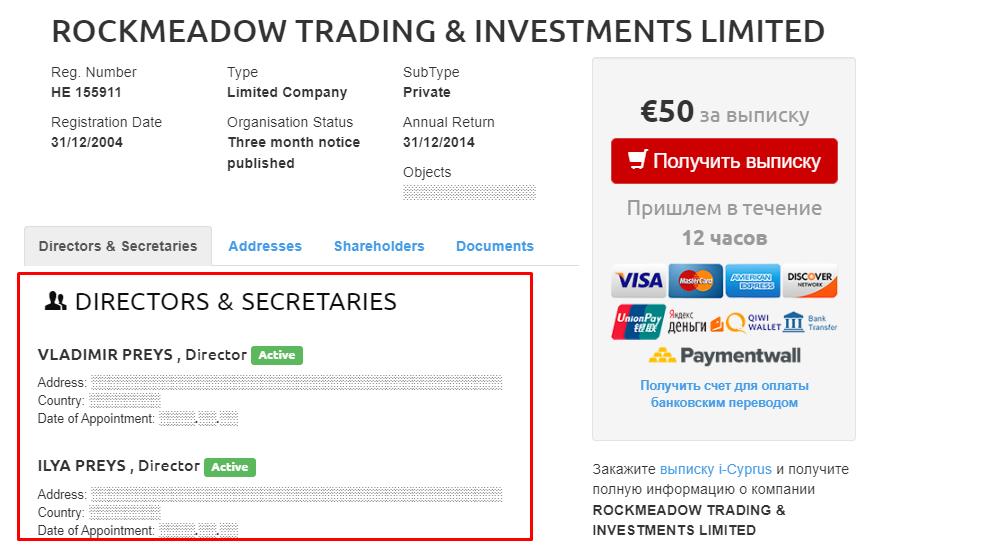 I would like to add that the former top manager and friend of Preis, Lev Weinberg, who was detained back in the 90s, was suspected at that time of having pushed through the closing document on the supply by Solev Management, where he was the head board of directors, precious metals.

It turns out that schemes for illegal manipulations with such assets could have been implemented even at that time?

According to the authors of the Moment of Truth website, Ilya Preis was allegedly accused of manipulating fictitious bills, but, apparently, the case was quietly covered up.

State millions in the hands of a swindler?

At the moment, a total of 13 companies are registered with Vladimir Preis in Russia. Three of them are going bankrupt, three are being liquidated for other reasons, three are no longer functioning. Of the bankrupt, Aslm LLC stands out, which, in addition to Preis, owns JSC Firma August. This is a subsidiary of the largest pesticide manufacturer “August” Alexander Uskov, which receives big government contracts. 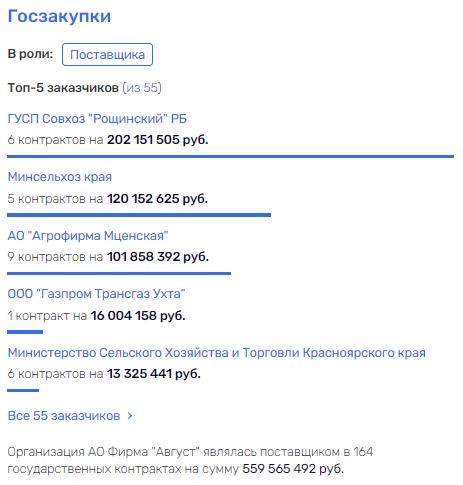 I wonder how such a structure did not have enough funds to support the “daughter”? Or was the money withdrawn from it to offshore companies controlled by Preis?

Ulug-Khem LLC, which is in liquidation, is also registered for Preis, senior and junior, which is engaged in the trade of non-ferrous metals. And, although in relation to both founders, according to Rusprofile, there is a note about the unreliability of information, we venture to suggest that metals obtained by not entirely legal methods (as in the story with Weinberg and Ginalmazzoloto) could pass through this office .

According to The Moscow Post sources, the Preys, who have potentially withdrawn billions of dollars from Russia, are now abroad, where they are reaping the fruits of their “labor” on their laurels. I would like to ask law enforcement agencies a question – how is this possible?

The Moscow Post asks that this article be considered an official appeal to the Prosecutor’s Office and the Ministry of Internal Affairs.