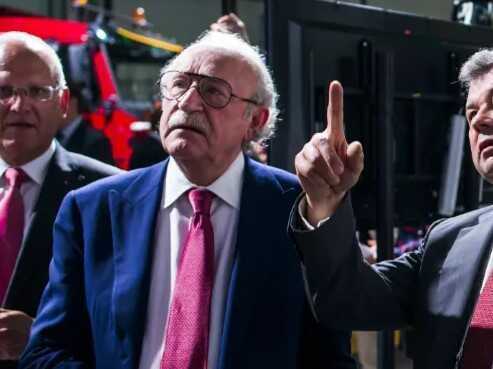 Every year, on the eve of winter and snowfalls, Deputy Head of Moscow Mayor Pyotr Biryukov reports that more than 15,000 units of specialized municipal equipment are ready to take to the streets of the city. This information is cheerfully duplicated on its website and by the State Budgetary Institution “Roads”.

However, few people think about where all this equipment comes from the municipality. For an ordinary inhabitant, the main thing is that the streets and yards are clean, but how and who does it is the tenth thing. But this is where the Klondike lies for those who understand the topic. Remember how the notorious Italian mafia earns in America. For some reason, most are sure that these are drugs, gambling and prostitution. This is true, but these are illegal earnings, with which the mafia has a lot of problems.

But mafiosos get their main profits from state and municipal contracts. These include street cleaning and waste disposal. These works are forced to do any power. And huge amounts of money are allocated for this from the budgets. Therefore, smart people have long understood that instead of a dangerous drug business, it is better to have a legal city cleaning business.

Moscow is no exception. Here, the fertile theme of repairing the streets and cleaning them from debris has long been crushed by structures associated with Semyon Mogilevich, widely known in narrow circles. 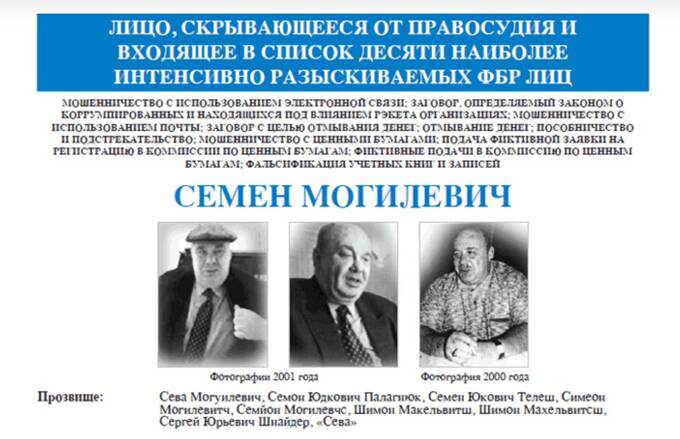 Every year, billions of rubles go from the city budget to the Mercator company, which is owned by the “right hand” of the authority wanted by Interpol, Semyon Mogilevich (Don Simeon), Stanislav Nikolaev. The latter is a member of the Moscow government and the State Budgetary Institution “Avtodor”.

Mercator Holding LLC, which regularly wins tenders for the supply of road equipment to the city of Moscow, lists Transstroy LLC as the founder and, purely formally, Nikolaev has nothing to do with Mercator.

There is an explanation for this – behind Transstroy LLC there is a group of people who control the cut of budget funds passing through Mercator. These are the already named Mogilevich and Nikolaev, but the circle of people clinging to the Moscow budget is not limited to them alone. One of them, by the way, was the leader of the Solntsevo group, Sergei Mikhailov (Mikhas). The same Nikolaev is in control of this structure and its “face”. Sobyanin’s deputy Pyotr Biryukov is closely connected with Mercator. The Mercator also has another “guardian angel”. This is the head of the State Budgetary Institution of Moscow “Roads” Alexander Oreshkin.

Thanks to such a formulation of the issue, huge budget money is pumped into Mercator and other structures of Mogilevich and Nikolaev. Transstroy, which owns Mercator, has five owners: Andrey Bugaev (27.49%), Chairman of the Board of Directors of Mercator Stanislav Nikolaev (25.01%), President of Mercator Alexander Belogortsev (25%), Hong Kong Goldmax Holdings Limited (17.5%) and Vitaly Sadykov (5%). But, in addition, Transstroy LLC is the founder of a number of other companies: 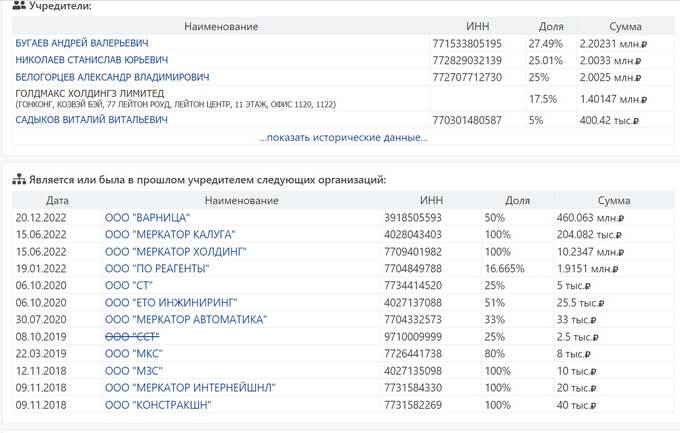 And most of them are controlled to some extent by Stanislav Nikolaev (behind him, let’s not forget this, is Semyon Mogilevich). And most of these firms also receive money from the Moscow budget. And against the background of some of these firms, even Mercator Holding LLC, which has been the favorite of the Moscow City Hall for several years now, pales.

And some of them are much more interesting than the banal supply of equipment. We are talking, for example, about the Ecotechnopark Kaluga landfill, which opened 200 kilometers from the capital and is the largest in Russia. The Moscow authorities spent more than 30 billion rubles on its construction, a significant part of the money went to the ultra-modern and expensive sorting equipment installed by the Kaluga plant of utility vehicles.

What’s with the Mercator? Everything is really simple. Kaluga Plant of Communal Machinery LLC (KZKM) was established at the end of 2017, officially only three people worked there. The founder of KZKM LLC is Transstroy LLC. True, after they began to write about the activities of KZKM LLC, the company urgently changed its name. Now it is called Mercator Spare Parts Service LLC, but the essence of this has not changed.

This company also supplies the Moscow mayor’s office with equipment. Which gives out for the Russian. But in fact, this is nothing more than a screwdriver assembly of equipment supplied by the Swiss Bucher Industries: 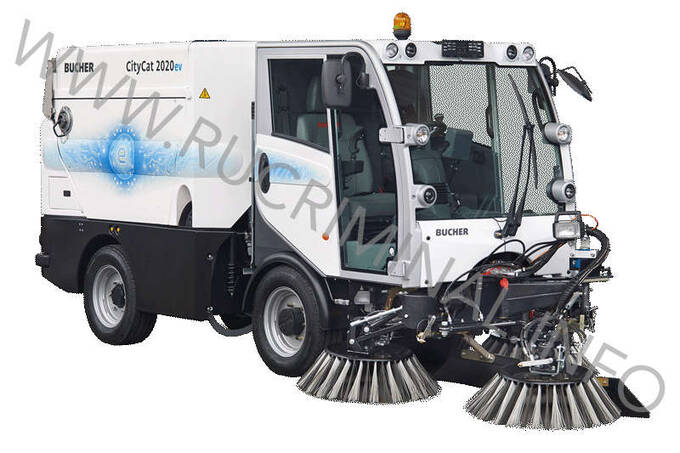 The plant in Kaluga is positioned as its own production, jointly with Bucher. At the same time, in the report for Bucher’s shareholders, the plant in Kaluga is referred to as Bucher Municipal plant in Kaluga, that is, Bucher considers it its own plant. The report includes the following phrase: With the increased demands on value creation within Russia, the CityCat 2020 compact sweeper is now also being fully assembled and tested in Kaluga. The assembly line was constructed according to specifications used in Western Europe. It follows from it that the CityCat 2020 is only being assembled and tested in Kaluga. In the next sentence, the plant is generally called an “assembly line”, and on the official website of Bucher, the plant in Kaluga is listed as a local production in Russia.

Roughly speaking, in Kaluga, imported equipment that arrived in a slightly disassembled form is put on wheels and immediately sold under the guise of the Russian Moscow City Hall, which is directly prohibited by Russian law. Therefore, everything related to the production of foreign cars is fictitiously confirmed only by CT1 certificates. For example, Bucher CityCat 2020 (Bucher manufacturing plant, UK) was supplied as a VKM-2020 by a Russian manufacturer.

The scheme of work is that Mercator imports disassembled imported equipment into the territory of the Russian Federation through a network of “friendly” companies, like car kits, then it is assembled back at the plant. In fact, at the plant in Kaluga, the wheels are “fastened” and attachments are installed.

Thus, the structures of Mogilevich and Nikolaev are sucking tens of billions of rubles out of the Moscow budget. According to state registers, the amount of government contracts received by Mercator Holding LLC exceeds 28 billion rubles: 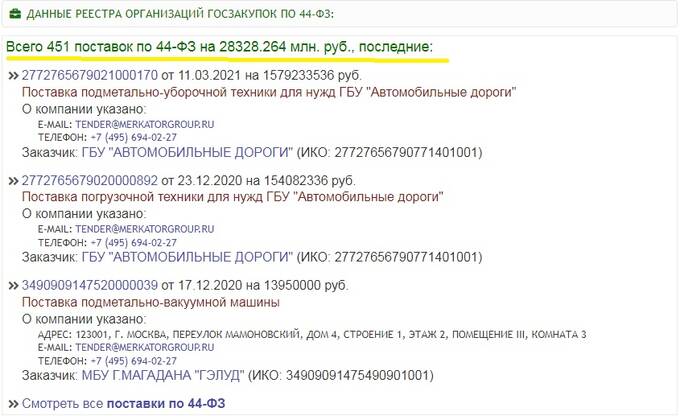 And this is far from complete data – the register displays public procurement as of 2021, and this is only what Mercator Holding LLC received. But other structures of Stanislav Nikolaev also receive Moscow contracts.

Isn’t it because of the beautiful eyes in the Moscow government that they have been ignoring the instructions of the FAS for years and prescribing tender documentation in such a way that only Mercator or firms owned by its owners can win the tender?

The answer is also simple – Pyotr Biryukov, the deputy mayor of the capital in the Moscow government for housing and communal services and landscaping, helps Mercator. According to the press, this long-term cooperation brought him considerable material benefits. 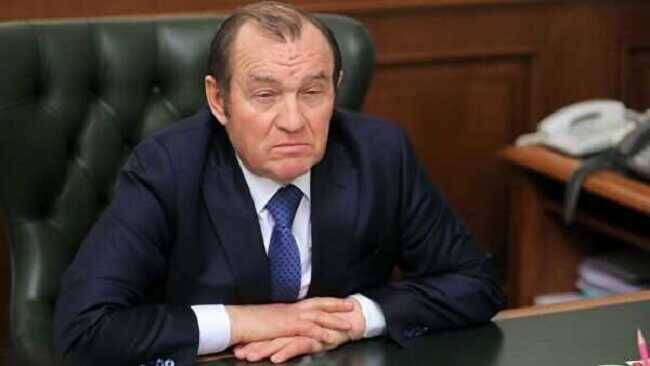 The Mercator also has another “guardian angel”. This is the head of the State Budgetary Institution of Moscow “Roads” Alexander Oreshkin.

It is thanks to these two people that Mercator’s strategic partner, the Swiss company Bucher Municipal, which actually creates the spreaders and sweepers purchased by Moscow, makes a good profit.

Stanislav Nikolaev, who managed with the help of Mikhas (as can be seen from the Unified State Register of Legal Entities, at the beginning of the 2000s Sergey Mikhailov, together with Nikolaev, owned shares in NPO Mercator LLC and Mercator Holding LLC, and left the owners in 2004) and Semyon Mogilevich, create a structure , which quickly found a common language with the authorities of Moscow, also clearly does not remain in the loser.