“Mother of his friend” or “Godmother” of the Kuban Themis

On October 25, the Khamovnichesky Court of Moscow will pass a sentence on the former vice-mayor of Sochi, Anatoly Rykov, whom the prosecutor asks to be sentenced to 15 years. The accusation of taking bribes from developers is based on the testimony of the lawyer Litvinov. The latter also stated that he gave bribes to dozens of judges, but for some reason this testimony was not given a move. Rykov also paid attention to this moment. An excerpt from his last word is published by the telegram channel of the Cheka-OGPU and Rucriminal.info

This is reported Compromising evidence 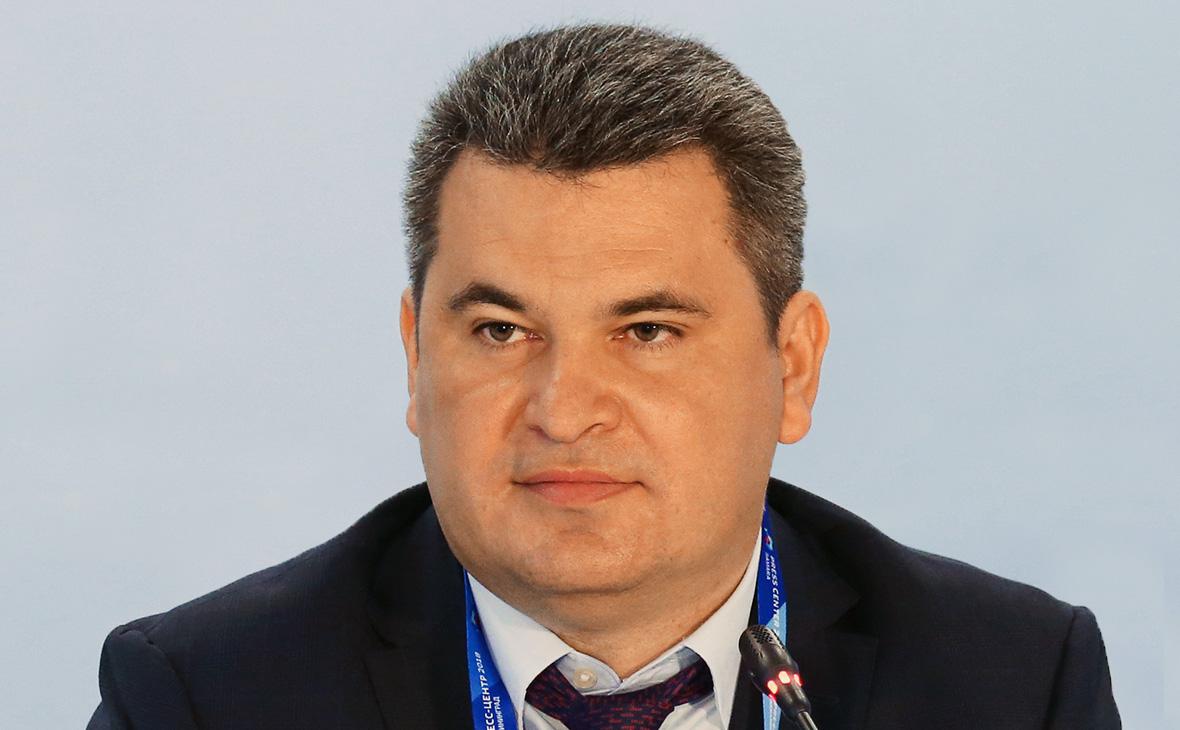 “The public prosecutor pursues the goal of shifting responsibility from the judges who made decisions in favor of the interested parties to the employees of the Administration of the city of Sochi. It is very likely that this is done only because federal judges could not be held accountable, and a high-profile criminal case, without sufficient evidence, should be completed with a guilty verdict.

That is why the public prosecutor, following the investigation, deliberately “does not notice”:

– that the only decisions in favor of the persons concerned in all three cases are the appeal rulings of the Judicial Collegium for Administrative Cases of the Krasnodar Regional Court;

– that from the testimony of the main prosecution witness Litvinov A.Yu., it follows that it was this judicial panel that was led by the “mother of his friend” ex-judge EV Khakhaleva, who is currently on the federal wanted list and arrested in absentia by the court.

The objective data from the conversations recorded by the FSB of the Russian Federation, in which Litvinov A.Yu. explains to the bribe giver the “pricing” for judicial acts of the Krasnodar Regional Court in favor of developers, based on the area of ​​the building planned for construction, his conversations with the bribe giver Stroganov IA about the storage in the complex ” Marina-Park” (EV Popandopulo’s ownership of the building was recognized by the court) of marble belonging to the same Khakhaleva EV for the repair of apartments, as well as correspondence on the phone of Litvinov A.Yu. with his employee, in which he instructs the latter to take EV Khakhaleva to the waiting room. an envelope, enclosing a note indicating the details of the case and the expected definite decision.

It is impossible to believe in the objectivity of the investigation and the position of the public prosecutor in the absence of even attempts to clarify these circumstances from his main witness Litvinov A.Yu.

That is why the wording of my accusation is set out in such flawed constructions, from the point of view of proving any of my guilt: “Rykov was supposed to sign building permit forms, but did not do it”, “Rykov had to go “persuade” the head of the city of Sochi Pakhomov AN in “the need to execute judicial acts”, but judging by the reaction of the latter he did not do this”, “Rykov reported on the movement of Filinova’s documents in the administration of the city of Sochi, in particular that the refusal would be in the near future”, however, it turned out that Khvorov EM to Litvinov A.Yu. already came with the refusal of Filinova, “In order to create an appearance, Rykov organized an appeal (!!!) in cassation of a judicial act in favor of Filinova II, in the absence of any information that Rykov had anything to do with organization of representatives of this trial”.

The imputation of actions to which I not only had nothing to do, but could not have had by virtue of my direct activities and official duties, cannot be called a legitimate, justified, just accusation, and the investigation that resulted in such an accusation cannot be called legal and objective.


8. Unfair and non-state is the position of the investigation and the public prosecutor, which consists in a categorical refusal to ascertain the location of the funds taken out by Litvinov A.Yu. to Austria during the period of receiving money from bribe givers (2016-2018) as established by the FSB of the Russian Federation and complete disregard for information about the cash movement on bank accounts Litvinova A.Yew., investigators in court session.

It was established that Litvinov A.Yu., received in the city of Sochi from the developers of Klyus VV and Stroganova IA I deposited cash on the days specified in my charge to my account, after which I transferred it to my other accounts for personal purposes. The investigation, contrary to the statements of the state prosecutor, did not record a single fact of withdrawing cash in the city of Sochi for the purpose of “dividing it as it arrives,” as Litvinov A.Yu. assured everyone in this hall.

It was established that all the money received in the episode with Khvorov EM, which arrived at the account of Legis Imperium LLC, under false contracts for the execution of instructions, was subsequently transferred to the account of IP Litvinov Yu.N., who is the father of Litvinov A.Yu., and spent by the latter at his own discretion.

presiding in the case, asking Litvinova A. Yew. dozens of issues, including those regarding property and funds, which were identified by Litvinov A.Yu. as “others”, was not interested in the information of the FSB of the Russian Federation about the export of millions of euros and hundreds of thousands of US dollars by this special witness for the prosecution to Austria, without asking a single question about this.

It is hard to realize that the investigator of the main investigative body of the country, having received a statement from me in the manner prescribed by law with the attachment of documents, simply withdrew them from the case file.

At the same time, it was not just an act of some kind of organizational laxity of the investigator, it was a completely conscious act aiming at preventing important evidence of the rabid unsubstantiated arguments of the investigation contained in the accusation on the episode of Khvorov EM These documents, by their chronology and essential content, destroyed the position of the investigation, set out in the accusation and built on the false statements of the unscrupulous businessman Khvorov EM, whose purpose was to burden the municipal land plot with its subsequent appropriation.

Otherwise, it is impossible to characterize the position of the public prosecutor about the alleged proof of the transfer of money, in the absence of any other evidence of this, except for the testimony of Litvinov A.Yu., including video recording of these circumstances in the place indicated by Litvinov A.Yu., as a place transmission of data bribes, namely in the apartment at the address: Sochi, st. Kubanskaya, d. …. The cynicism of such a position of the public prosecutor lies in the fact that he knows for certain the fact that video surveillance was conducted in the indicated apartment for a long period of time within the framework of the operational investigation and it would be impossible not to record the repeated transfers of money. This explains the allegedly “strange” position of the FSB officers, who for several years allegedly observed the criminal activities of the group, but did not make any attempts to stop its activities by red-handed persons committing illegal actions to receive bribes. The FSB officers did not make these attempts, because the means of objective control recorded anything, except for the transfer of bribes ….

The court at the hearing, without even making an attempt to turn on Litvinov A.Yu.’s phone, began to assert that there was an insurmountable password blocking. It turns out that the person who entered into a pre-trial agreement on cooperation with the investigation did not tell the investigators the passwords for entering the telephones belonging to this person, and this circumstance is not regarded by the prosecution as an opposition to the investigation in obtaining evidence in a criminal case by a person who undertook to provide maximum assistance to the investigation in this question.

I am not guilty! No bribes from Stroganov IA, Klyus VV and Khvorov and EM neither personally nor through the actions of Litvinov A.Yew. I didn’t receive. Statements about this by Litvinov A. Yew. lie and slander.

The evidence examined at the court session gives grounds for the court to issue only one verdict, which can be considered lawful, justified and motivated—this is an acquittal!

In this regard, I ask you to pronounce a legal, reasoned and motivated verdict!” 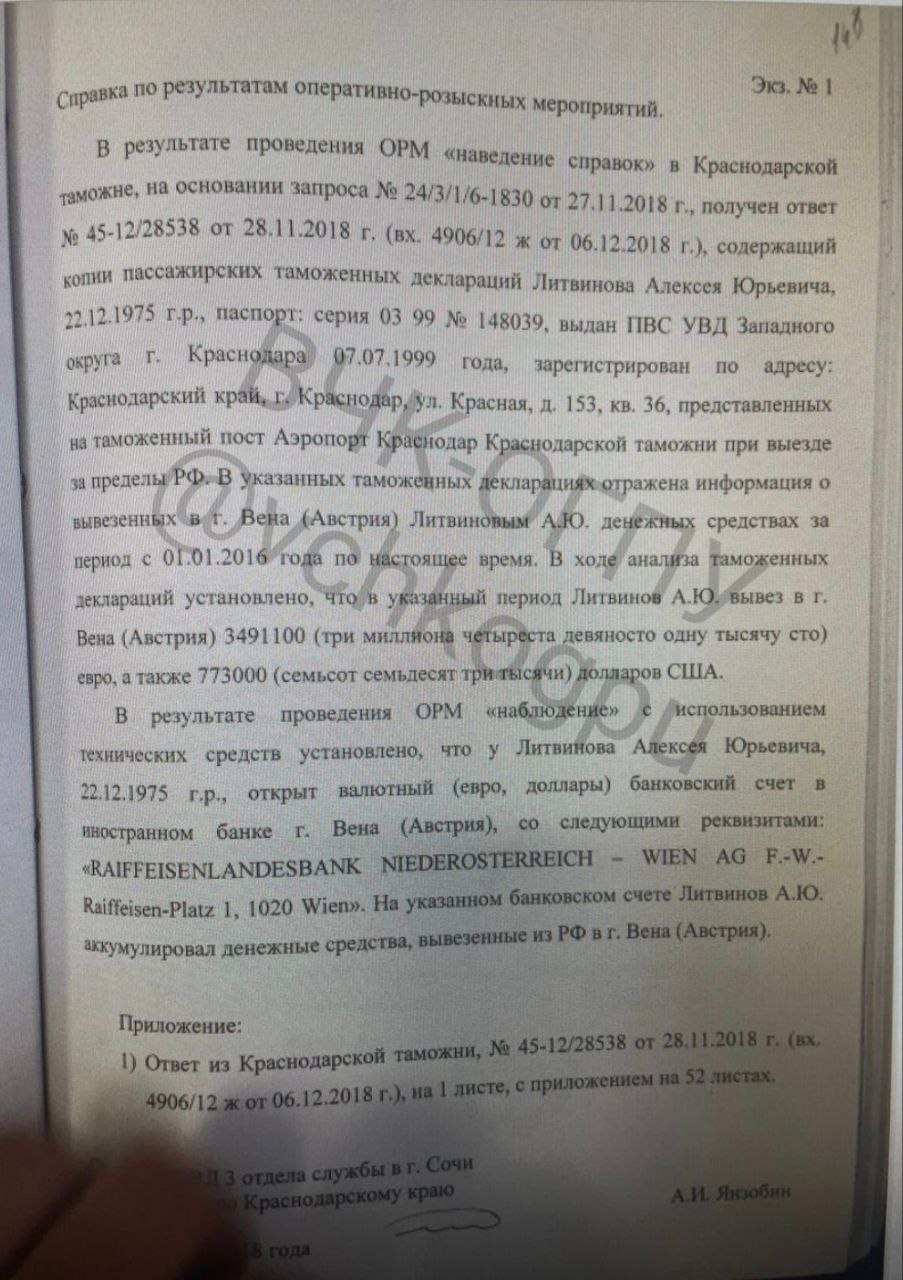 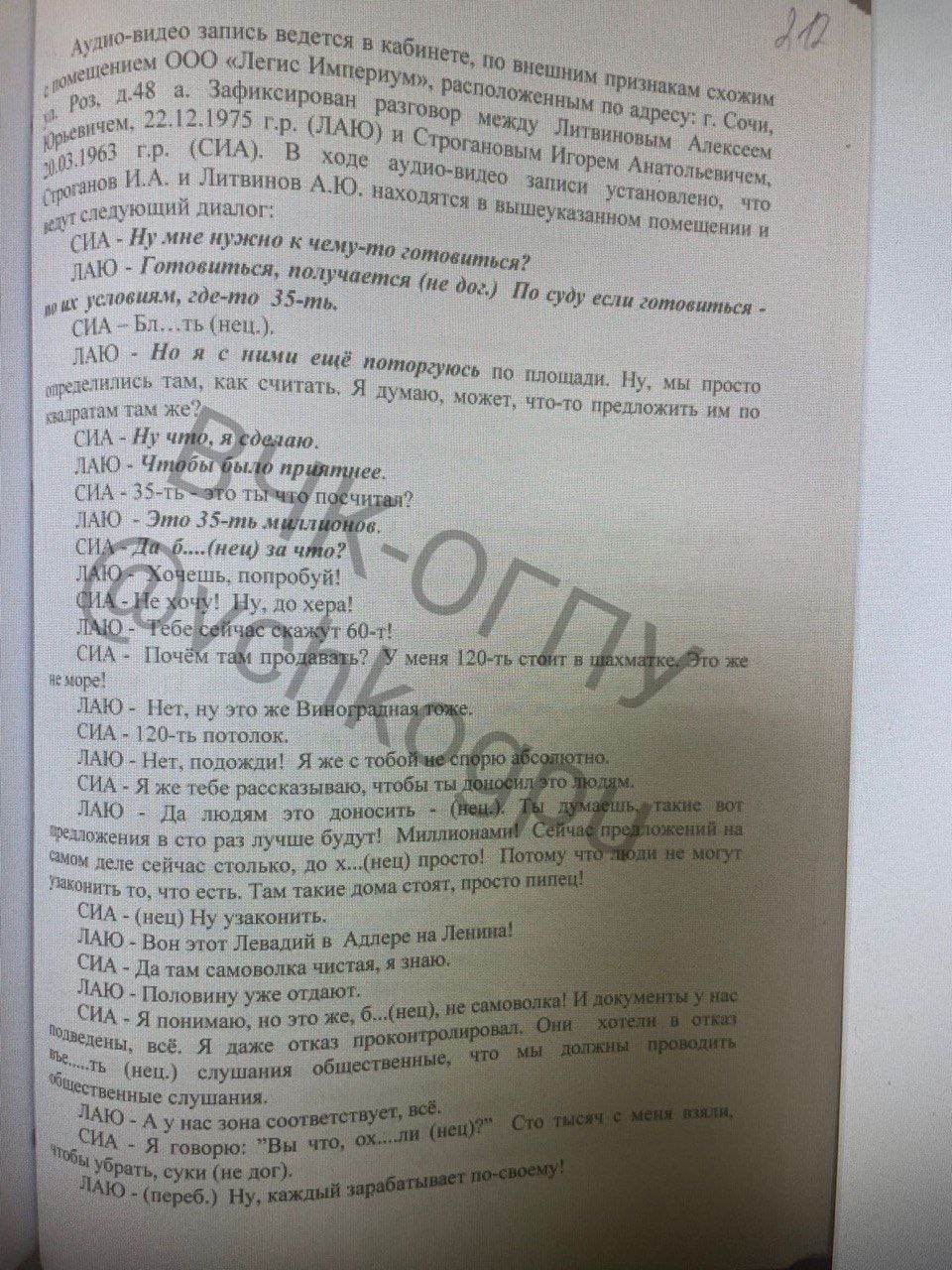 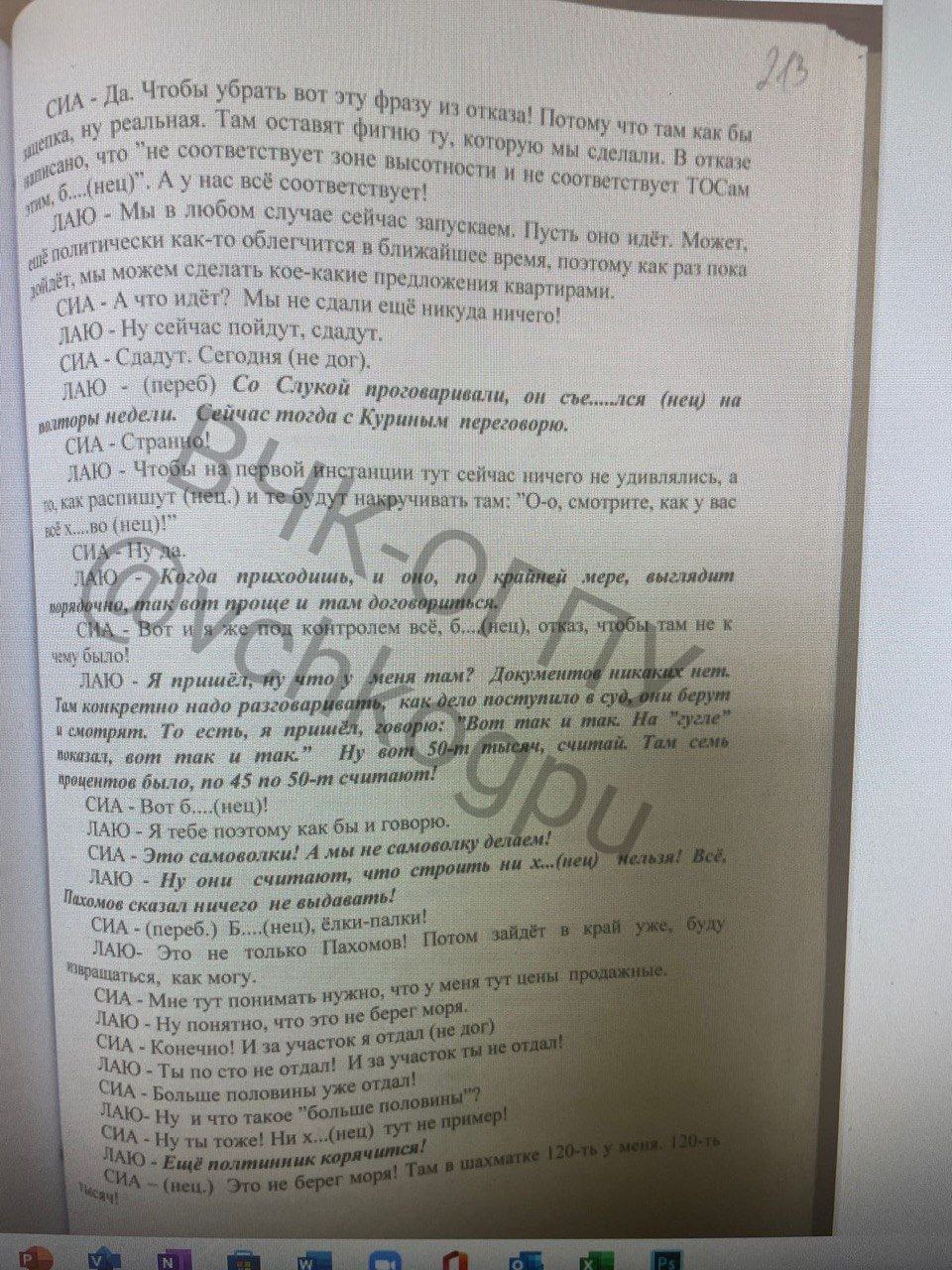 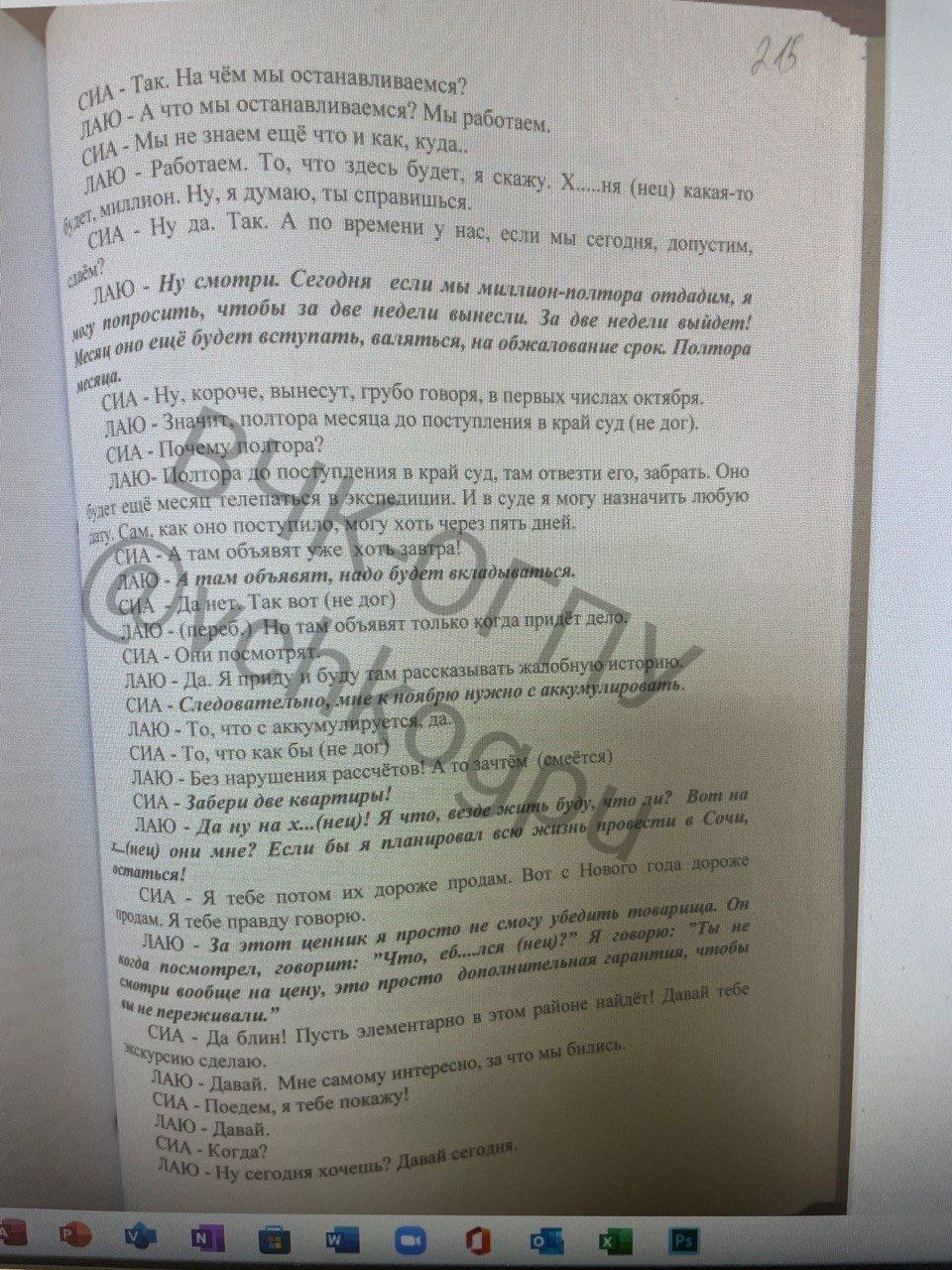 Have Rosseti been scammed twice by tens of billions of rubles?